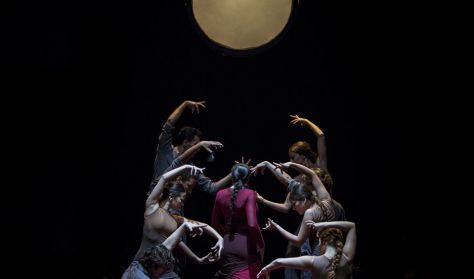 “Everyone knows that the genius of dance lives in María Pagés – there is no doubt about that. But she’s so much more than that: when she dances, she moves everything around her, and after her performance, neither Heaven nor Earth remains the same,” said Nobel Prize-winning Portuguese writer José Saramago. The world-famous Seville dancer has enriched the tradition of flamenco with new and fresh impulses, and looks upon this culture and tradition as a contemporary and living language of art. Poetry and music are at the core of her works, which draw their inspiration from a wide range of sources, from John Lennon through Verdi to Paco de Lucía.

An Ode to Time tells the story of transience, permanence and eternity, serenely, without taboos, but with deep feeling. “Our destiny is not frightful by being unreal,” wrote Jorge Luis Borges, and María Pagés agrees with him, “it is frightful because it is irreversible and iron-clad. Time is the substance I am made of. Time is a river which sweeps me along, but I am the river.”