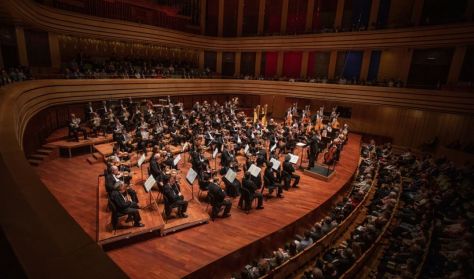 Béla Bartók died on 26 September 1945, in New York City. The night before the anniversary of this date is when the Hungarian National Philharmonic Orchestra opens the Budapest concert season. This special evening always features the music of Bartók, but can also include pieces by other composers.  more

Bartók's 1943 five-movement symphony-like Concerto for Orchestra, commissioned and later premièred with the Boston Symphony Orchestra by conductor Serge Koussevitzky, is a monumental artistic achievement from the conductor's years in America. Although its classification as a concerto refers to the many representative instrumental solos it contains, its emotional message conveys the homesickness of an artist torn from his native land. Ernő von Dohnányi was also an émigré when, eleven years later, he wrote his rarely heard American Rhapsody, the first piece in the concert. Commissioned by Ohio University, the piece treats popular American melodies in the format of a fantasy. Between these two orchestral compositions, we will hear the only concerto that Beethoven ever wrote in a minor key. The weighty and serious sound of the Piano Concerto No. 3 in C minor, which dates from 1800, reveals the influence of the piano concerto that Mozart composed in the same key. Dezső Ránki is one of the leading figures in the international community of pianists and a world-famous member of the revolutionary new generation that took over in the 1970s. From the Met to Covent Garden and Zurich, Henrik Nánási is at home in many of the world's major opera houses and concert halls. While serving as principal music director of Berlin's Komische Oper between 2012 and 2018, he conducted numerous highly successful performances there.